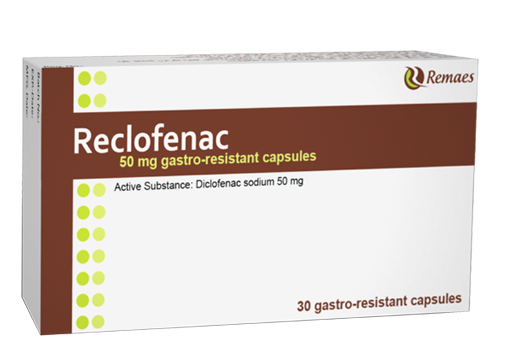 Active Ingredient:
In each capsule 50 mg is diclofenac sodium.

Contraindications:
Do not take Reclofenac 50 mg, if you are allergic to diclofenac sodium or to any of the other ingredients of Reclofenac 50 mg gastro-resistant capsules.

Like all medicines, this medicine can cause side effects. If you should experience any of the following side effects, please discuss them with your doctor, who will then decide what to do next.
The following frequency data are normally used for evaluating side effects:

It must be remembered that the following adverse drug reactions are mainly dose-dependent and can vary from patient to patient. The most commonly observed side effects involve the digestive tract. Gastroduodenal ulcers (peptic ulcers), perforation or bleeding – sometimes fatal – may occur, particularly in elderly patients. The following have been reported after Reclofenac administration: nausea, vomiting, diarrhoea, flatulence, constipation, indigestion, abdominal pain, tarry stools, blood vomiting, ulcerative stomatitis and worsening colitis and Crohn’s disease. Less commonly, inflammation of the stomach lining has been observed. In particular, the risk of gastrointestinal bleeding depends on the dosage range and duration of treatment.  Oedema, high blood pressure and heart failure have been reported in association with NSAID treatment. Medicines like Reclofenac 50 mg may be associated with a slightly higher risk of heart attack (“myocardial infarction”) or stroke.

Very rare: blood formation disorders (anaemia, leukopenia, thrombocytopenia, pancytopenia, agranulocytosis). First signs may include: fever, sore throat, superficial lesions in the mouth, influenza-like symptoms, severe abnormal tiredness, nosebleeds and skin bleeding. In such cases, you must stop taking the medicine immediately and consult your doctor. You should never attempt to treat such disorders yourself with painkillers or fever-reducing drugs. Your blood count should be regularly monitored during long-term therapy. Very rare: haemolytic anaemia (caused by an accelerated breakdown of red blood cells) or aplastic anaemia (caused by a blood formation disorder) may occur.

Very common: gastrointestinal disorders such as nausea, vomiting and diarrhoea, as well as slight gastrointestinal blood loss, which in exceptional cases can cause anaemia. Common: indigestion (dyspepsia), bloating (flatulence), abdominal cramps, loss of appetite and gastrointestinal ulcers (with bleeding and perforation in some cases). Uncommon: gastritis, bloody vomiting (haematemesis), blood in the stools or bloody diarrhoea, stomach and intestinal ulcers. If you experience quite severe pain in the upper abdomen, blackening of the stools or blood in the stools, you must stop taking Reclofenac 50 mg and tell your doctor immediately. Very rare: inflammation of the mouth lining, inflamed tongue, oesophageal lesions (damage to the gullet), constipation and lower abdominal complaints, e.g. bleeding and inflamed colon, worsening ulcerative colitis or Crohn’s disease (types of colon inflammation accompanied by ulcers), inflamed pancreas (pancreatitis). Very rare: narrowing of the bowel has been reported.

Very rare: worsening infection-related inflammation (e.g. development of necrotising fasciitis) has been described in temporal association with the use of specific anti-inflammatory agents (non-steroidal anti-inflammatory drugs, to which Reclofenac 50 mg also belongs). For this reason, you should consult a doctor immediately if signs of infection (e.g. redness, swelling, excessive heat, pain, fever) appear or get worse during use of Reclofenac 50 mg. Very rare: symptoms of aseptic meningitis, e.g. severe headache, nausea, vomiting, fever, stiff neck or reduced consciousness, have been observed during use of Reclofenac. There seems to be a higher risk for patients already suffering from certain autoimmune disorders (systemic lupus erythematosus, mixed connective tissue disease).

Rare: Hypersensitivity reactions are possible and may manifest as fall in blood pressure, heart racing and life-threatening shock. Very rare: Oedema which may manifest as swelling of the face, tongue or inner larynx with constriction of the airways, shortness of breath possibly leading to asthma attack.  If any of these symptoms occur, which is possible even the first time the medicinal product is used, immediate medical attention is necessary. In these cases the medicine must be stopped at once and the doctor consulted.

Always follow the procedures given above regarding what to do in the event of certain side effects.

This section tells you when certain conditions apply when taking Reclofenac 50 mg (i.e. at longer dosing intervals or reduced doses, whilst under medical supervision). Even then, particular caution is required. Please ask your doctor for more information. This section is also relevant if the following information has ever applied to you in the past.

Combined use of Reclofenac 50 mg and other non-steroidal anti-inflammatory drugs (NSAIDs), including so-called COX-2 inhibitors (cyclooxygenase-2 inhibitors), should be avoided.

If you have a history of gastrointestinal side effects – particularly if you are elderly – you should report all unusual abdominal symptoms (especially gastrointestinal bleeding), particularly at the start of therapy. Caution is advised if you are also taking other medications that may increase the risk of ulcers or bleeding, such as oral corticosteroids, anticoagulants e.g. warfarin, selective serotonin reuptake inhibitors that are used to treat disorders including depression) or platelet aggregation inhibitors such as ASA (see section 2: “Other medicines and Reclofenac 50 mg”).

Treatment must be stopped if you develop gastrointestinal bleeding or ulcers whilst taking Reclofenac 50 mg.

NSAIDs should be used with caution in patients with a history of gastrointestinal disease (ulcerative colitis, Crohn’s disease), as their condition may get worse (see section 4).

Effects on the cardiovascular system

Medicines like Reclofenac 50 mg may be associated with a slightly increased risk of heart attack (“myocardial infarction”) or stroke. Any such risk is more likely at high doses and during prolonged treatment. Do not exceed the recommended dose or duration of treatment.

You should discuss your treatment with your doctor or pharmacist if you have heart problems, a history of stroke or if you think that you might be at risk of such disorders (e.g. if you have high blood pressure, diabetes or high cholesterol levels, or if you smoke).

Very rarely, serious skin reactions with redness and blistering, some of which were fatal, have been reported during NSAID therapy (exfoliative dermatitis, Stevens-Johnson syndrome and toxic epidermal necrolysis/Lyell’s syndrome; see section 4). The risk of such reactions appears to be highest at the start of therapy, as these reactions mostly occurred during the first month of treatment. At the first sign of skin rash, mucous membrane lesions or any other signs of a hypersensitivity reaction, you should stop taking Reclofenac 50 mg and consult your doctor immediately.

It is imperative to exercise caution (discussion with the doctor or pharmacist) before patients with hepatic dysfunction start treatment, because their condition could worsen under Reclofenac treatment. If Reclofenac 50 mg is taken for a long time, or repeatedly, regular monitoring of liver function is an appropriate precaution. If clinical signs of liver disease are found, Reclofenac 50 mg should be stopped immediately.

Particular caution is called if you have an impaired cardiac and renal function, a history of hypertension or you are receiving diuretics.

If you have a history of pulmonary diseases, allergies or swelling of the nasal mucosa, reactions like asthma or oedema are more likely than in other patients. In this case special precaution (readiness for emergency) is recommended.

Particularly close medical monitoring is required: – immediately after major surgery; – if you suffer from an allergy (e.g. skin reactions to other medications, asthma, hay fever), chronic nasal congestion or chronic obstructive respiratory disease – if your kidney or liver function is impaired.

Since Reclofenac can suppress signs and symptoms of an infection, including fever, it should be used with caution in patients with an infectious risk. Should you develop signs of an infection (such as redness, swelling, heat, pain and fever) or if existing signs worsen, please inform your doctor immediately.

If you are taking Reclofenac at the same time as anticoagulants (blood thinners) or antidiabetic agents (used to lower blood sugar levels), your blood clotting status/blood sugar levels should be monitored as a precaution.

During prolonged use of Reclofenac 50 mg, you should have your liver values, kidney function and blood count regularly monitored.

Whilst taking Reclofenac 50 mg, you must consult/inform your doctor or dentist before you undergo any surgery.

During prolonged use of painkillers, headache may occur, which must not be treated with increased doses of the medication. Ask your doctor for advice if – despite taking Reclofenac 50 mg – you still suffer from frequent headaches.

As a general rule, habitual intake of painkillers – particularly if several painkillers are combined – may lead to permanent kidney damage with a risk of kidney failure (analgesic nephropathy).

Children Regarding administration to children and adolescents (see also section 2 of the package insert):
– Do not take Reclofenac 50 mg –

Read the package leaflet before use. Medicinal product subject to medical prescription. To be taken as directed by the prescriber. Keep out of the reach and sight of children. Do not store above 25°C. Keep the blister in the outer carton in order to protect from moisture.

We use cookies to ensure that we give you the best experience on our website. If you continue to use this site we will assume that you are happy with it.Ok
Scroll to top